“How We Made a Monster (and scared the bejeebers out of an entire high school)!” By Lloyd F. Ritchey

Today’s Best Of Halloween Haunts was originally published in 2017….

We watched with glee as a man scooped up a little girl and bolted for the door. The kid was kicking and screaming with fright. “Ah,” I thought. “Another successful show!”

I was a high school junior, and my esteemed institution was holding a Halloween-themed open house. The classrooms were crammed with the usual flaccid haunted house stuff: “Come inside kiddies, feel the witch’s guts.” (Bowl of cold spaghetti). Her eyeballs—hard-boiled eggs. Yawn.

My friends, Warren and Pete, and I had presented the school fathers with a proposal: we would produce Halloween shows a-la Frankenstein that would run about five minutes each, allowing fast turnaround for audiences of about 50 inside the school’s large visual arts room. We got approval. 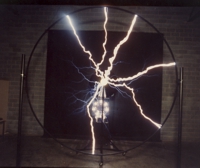 I had built Tesla coils and similar apparatus because I loved the dramatic electrical effects—just like in the old Universal Frankenstein movies. We set up an array of Tesla coils, Jacob’s ladders, neon and fluorescent lights, movie-prop quality discharge electrodes, knife-switch studded control console, and tilting “operating table.”

Pete played Igor, complete with prosthetic hunchback and facial makeup that alone would scare the hell out of a small kid. The audience was ushered into our darkened room and seated. I, playing the part of a latter-day Victor Frankenstein, wore a doctor’s operating gown and long, lead-lined X-Ray room gloves. We were set.

I gave the spectators a spiel about how I could reanimate dead bodies, as long as they were fairly fresh, of course. Warren, in full monster regalia, was beneath a white sheet on the tilted “slab.” I fired up the Jacob’s ladders, powered on a whirring electric motor, and punched on the Tesla coils in loud, stuttering bursts. The noise, three-foot lightning discharges from the coils, and flashing lights startled and wowed the audience.

Warren began to writhe beneath the sheet. He rose. The sheet fell away and the red spotlight revealed his hideous face. The audience screamed and squirmed. And when our monster climbed from the slab, threw Igor to the floor, and stalked toward the audience, I shouted, “Don’t let him touch you! He’s charged with electricity!”

The small kids were screaming and crying and bolting for the door; the parents were jumping from their seats, knocking over chairs, trying to control the stampede. The Monster, Igor, and I were sadistically laughing our heads off. The word got around. Soon the entire school was jamming the hallway, jostling to see us rejuvenate a dead body. All the other rooms and activities were left vacant.

I don’t know how many shows we performed that night, but we were tired as hell when it was over. How to Make a Monster was a great success. We scared the crap out of kids and adults alike; we caused mayhem, maybe even messed-up some of the younger kids for life.

For one night we were horror stars, and we’d never had so much fun at Halloween! 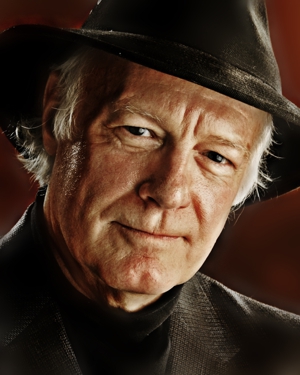 After years of technical writing, producing TV commercials and industrial films, designing special effects for rock n’ roll groups, and creating flashy shows for science museums, Lloyd F. Ritchey is focused on writing novels. Harnessing a science background, he writes thrillers and horror, all with a technical spin. The first edition of his horror novel,  The Kellsburg Vampire, and second edition of his thriller, Stormdragon, have been released. He lives in North Texas with his wife, Christine, a best-selling author. When he’s not writing, he’s tossing Frisbees for their two hyperactive Border collies.  Or fixing the plumbing. (View the spooky trailer for The Kellsburg Vampire at his website: http://www.LloydRitchey.com)