Fear is one of those deeply personal things. I, for one, am absolutely terrified of clowns. There’s no good reason for this fear, and my mother assures me she never abandoned me at a circus during my childhood. I’m not sure I believe her, but there you have it.

I remember back in the day finding certain horror movies the most terrifying thing in existence (other than clowns, of course.) Take A Nightmare on Elm Street, for example. Freddy Krueger was scary with a capital S. That was then, though, and this is now. I recently attempted to scare my fifteen-year-old nephew with a clip from the movie, and he just gave me an eyeroll. Movies have come a long way since then, and I suppose that’s one of the things we gain with technology—better CGI and all that jazz makes things that were top of the line and fearworthy then not so terrifying now.

One thing that hasn’t changed, however, is reading. Horror novels seem to pass the test of time in a way that movies can’t. Giving a Stephen King novel a re-read now is just as scary as it was the first time I read his work. And yes, It is probably a large part of my coulrophobia.

Horror has changed with technology too. Rick R. Reed is one of my go-to horror writers these days, and he’s kept up with technology in a truly terrifying way. In his thriller IM, we have an entirely new online world where bad guys can find us through our deepest-held Internet secrets. If that’s not scary enough, he’s also gone old-school and written about The Demon Inside. There’s nothing more classic than a haunted house, and this one is killer for sure.

Technology may have changed the way we view our horror movies, but it brings new challenges and opportunities for our favorite horror writing contemporaries. What technology do you find terrifying? I’d love to know what scares you!

TODAY’S GIVEAWAY: DSP Publications is offering one paperback copy OR ebook copy of Rick R. Reed’s A Demon Inside – winner’s choice. Enter for the prize by posting in the comments section. Winners will be chosen at random and notified by e-mail. You may enter once for each giveaway, and all entrants may be considered for other giveaways if they don’t win on the day they post. You may also enter by e-mailing membership@horror.org and putting HH CONTEST ENTRY in the header.

POPPY DENNISON is the Marketing Specialist for DSP Publications and a sassy southern lady. She developed an obsession with things that go bump in the night in her early years after a barn door flew off its hinges and nearly squashed her. Convinced it was a ghost trying to get her attention, she started looking for other strange and mysterious happenings around her. Not satisfied with what she found, Poppy has traveled to Greece, Malaysia and England to find inspiration for the burly bears and silver foxes that melt her butter. Her love of paranormal continues to flourish nearly thirty years later, 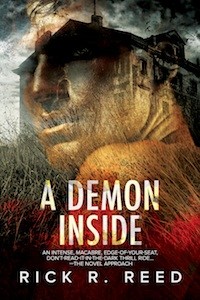 and she writes steamy love stories about the very things that used to keep her up all night. If her childhood ghost is lucky, maybe one day she’ll give him his own happily ever after.

Excerpt from A Demon Inside

It didn’t take them long to round the curve of the driveway and all at once, Beaumont House stood before them. Just as Hunter had imagined, its imposing fieldstone looked solid and formidable against the bright blue autumn sky. Double oak doors, appearing in remarkably good shape, were outfitted with black wrought iron hinges and fixtures, all without a trace of rust. The windows reflected back the sky and the few clouds in it, looking almost black and empty. Hunter fancifully thought of them as eyes and shivered. Yet, not a single pane was broken or cracked. The glass did not even look dirty. He paused, staring at the house, feeling an odd sense of déjà vu, but couldn’t recall how he could have even seen the house before. Ian, beside him, was silent. In awe, Hunter said softly, “God, Ian, I never would have guessed.”
Ian sucked in some air. “It is beautiful, isn’t it? Even more than I remember.”

Hunter took in more details: the roof was covered in black slate tile and again, looked in perfect repair. Black shutters fronted each of the windows. The house put Hunter in mind of what he imagined an English manor would look like and he briefly imagined red-jacketed foxhunters galloping through the grounds. There was a widow’s walk around the rooftop and to one side, a rounded tower completed the imposing façade.

All of it looked move-in ready.

Hunter scratched his head and turned to Ian. “I thought you said the place was falling down.”

“I assumed it was.” Ian’s expression revealed troubled thoughts beneath. He took in the house, eyebrows furrowed. “I mean, no one has been here for decades. The place should be in shambles, broken windows, doors off their hinges, weeds growing through the floors… Yet, it looks so well maintained.” Ian paused. “I don’t understand it. I took care of the property taxes for your family, but never paid out anything for upkeep. This is weird, Hunter.”

Hunter didn’t want to voice it, but he agreed. Aside from the overgrown vegetation outside the house, the place itself was almost pristine, as if someone still lived here, let alone not having been inhabited for more than half a century. Hunter began to wonder if all the overgrown trees and other flora could be tamed into a manageable yard and garden.

“The inside is probably a mess,” Ian said, weakly.

Hunter began striding toward the house. “You do have a key, don’t you? And I would withhold judgment on the interior if I were you.” Hunter paused just outside the double doors, waiting for Ian to catch up. He took in the detail of the floor-to-ceiling French windows on the first floor, how each was topped with intricate designs in leaded glass.

Ian was making his way through the weeds, toward Hunter, cursing as he stumbled. “Yes. I have a key.” He caught up and extracted a large, old-fashioned key from his jacket pocket, coated with rust. Hunter knew Ian could say nothing about the house, but also knew the lawyer would not deterred. “How do you propose to cut through all this?” He gestured at the trees and briars choking the lawn and driveway.

“Simple. I’m sure Wisconsin has a good supply of gardeners and landscapers, many of them, I’m sure, looking for work. They have skill. I have money. It could work. Can we go inside?”

“No guarantees this key will even fit.” He came alongside Hunter and inserted the key into the lock. The doors effortlessly opened, aided by a gust of wind behind them. There was not even a creak.

Hunter was astounded. And chilled. The massive foyer, with its curving staircase up to the second floor, its crystal chandelier, its marble-tiled floor, and its mahogany paneled walls—was spotless. There was not a trace of dust or grime anywhere. The chandelier sparkled as it caught the sun’s rays coming in from outside. The wood gleamed.

Hunter turned to Ian, confused. “Are you sure no one’s been taking care of upkeep?”

Ian shook his head slowly, walking more fully into the foyer. Hunter lagged behind, following his gaze as he looked into the living room, or what Hunter supposed in those days had been called the drawing room. It too was perfection. The windows gleamed, spot-free, in the sun. The wood floors looked freshly polished. The large fieldstone fireplace—a focal point—appeared to have been freshly swept, with a stack of logs on the grate inside, awaiting the touch of a flame.

“I have never authorized a payment for upkeep. Not in all the years I’ve been responsible for your family’s holdings.”

Hunter felt a chill. “Well, someone must be taking care of the place. It couldn’t just stay this way by itself.”

Hunter would have liked to tell Ian not to look a gift horse in the mouth, but the truth was, he too was as disturbed by the appearance of the house as Ian seemed to be. Delightful and pristine as the place was, it simply wasn’t—natural.

“I have no idea.” Ian turned to Hunter. “This is giving me the creeps.”

Hunter would not admit he was having a similar reaction. It would be all Ian needed to hear, enough for him to urge Hunter back into the car. “Who knows? Maybe there’s some neat freak in the village who comes by and takes out his obsession on the house.”

“That would give me the creeps as well.” Ian turned, his gaze roaming across the drawing room and foyer. He looked pale. “This sounds completely strange and I hope you’ll forgive me, but I don’t want to stay here anymore. My suggestion is we both go outside, get in the car, and head back to the city. On Monday, I will make arrangements for a demolition crew to come in and tear down the place. Then we can see about selling off the land.” Ian looked to Hunter, hoping, Hunter thought, for agreement.

“That’s your right,” Ian said softly. “But I don’t want to stay here anymore. I’ll be in the car when you’re finished.” He strode quickly toward the front doors, which still hung open.

Hunter watched him go, wanting to call him back. Ian paused, just outside the door and turned around. “Be careful. And be mindful that you may spend your trust fund allowance heating this place, lest you be entertaining any thoughts of moving in.” And then he was gone.

Hunter swallowed, standing in the middle of the drawing room. Fingers of dread played up and down his spine. Hairs stood up on the back of his neck. It wasn’t just the perfection of the place that made him feel so odd, it was another sensation, one he was just now becoming aware of.

He was being watched.

One comment on “Halloween Haunts: Technology and Fear by Poppy Dennison, DSP Publications”