My first attempt. It went rather well, I think.

I’m a proud Dane and we are often considered the “Happiest people on Earth”.

Danes, apparently, live a life of bliss in The Fairy Tale Nation of H. C. Andersen.

This is mostly true, but growing up here in the happy, cold North there was one instance in which I envied my distant US brethren with all my heart.

As a kid, I saw it in movies and sitcoms. US kids had an entire season devoted to the dark and creepy: A celebration of all things morbid. I was so jealous.

My love for the darkness came early, but we didn’t have scary toys here.

Mind you, this was the late seventies, early eighties. Zombies were not a pop culture thing. We were not even allowed to play with toy guns in my daycare, so anything scary would be banned as well.

I had to make do with the Skeletor action figure and a few disfigured Barbie dolls from my sister’s collection to create my own little freak show.

Oh, how I yearned for a Danish version of Halloween. To actually have adults participating and everyone taking it seriously seemed like a distant dream.

Then something strange began to happen.

As I grew older, the influence from US pop culture began to grow stronger here. The ever growing presence of the Internet made the world smaller and suddenly the stores began to announce Halloween deals. At first it was just a little notice, but every year it grew.

The Midi-chlorians were strong in this one.

A few years ago it reached the tipping point, and Halloween is now being hailed as a regular part of the year here.

As an adult, I can now share my love of the creepy with my own kids and celebrate Halloween in all its wretched glory. Last year we even carved pumpkins and decorated the garden a bit. This year I think I’ll up the ante. In a few years I’ll probably go full Haunted House mode and try to scare the neighborhood’s kids silly.

I’m a horror writer so our conversations around the dinner table are often related to dark themes. The kids love to talk about zombies and my youngest son is not quite happy with the fact that eating people is frowned upon.

I’m very happy that they will grow up in a world where Halloween is an established part of their lives.

Trick-or-treaters are still almost unheard of, but it is ever so slowly gaining ground. Still, some cultural things are lost in translation. When I browse the costume section of Halloween sites, I never quite understood the weird gender issue. It seems the males have a wide variety of creepy costumes to choose from, while the female costumes are mostly variations of the “Scary Stripper”.

Maybe it will make sense in a few years.

An interesting thing is that very few of us have ever experienced an authentic Halloween, so we imitate the sitcom version, which seems to work out fine.

I’ve always wondered why we didn’t have more scary celebrations in Scandinavia. Our winters are long and dark and the rest of the year is mostly variations on rain and drizzle. These gloomy conditions would seem to be the perfect setting for dark tales and creepy stories. We do have a short sunny summer though. Best day of the year.

We do have some fairly dark traditions. Every year around midsummer we build huge bonfires, place an effigy of a witch on top and stuff it with fireworks – you know, to make her scream when the flames start reaching her. Then we sing joyfully while we watch her burn, which is pretty brutal when you think about it.

In February we have our own costumed celebration, called “fastelavn”.

Children dress up and take turns assaulting a suspended barrel with wooden clubs. They all try their best to be the one to smash it open, making it spill its delicious candy contents everywhere.

As soon as the candy hits the ground any semblance of order breaks down. All the kids dive in like frenzied piranha trying to scoop up as much candy as possible, while the adults struggle to intercept the club wielding ones to preserve the good mood.

It’s not themed as grim as Halloween and we consider it a thing for the kids and teens, but it does have some advantages: The costumes are never of the “sexy” variety since Scandinavian winters in February and skimpy outfits don’t mix well.

Fastelavn is nice, but it’s not filled with the dark and spooky critters, and adults are not very involved.

So – while I’m usually a bit wary of the sneaking (and sometimes stampeding) cultural influence from the US, I heartily welcome Halloween. The world is made a better place because of it.

And Zombie Walks – these we also imported. 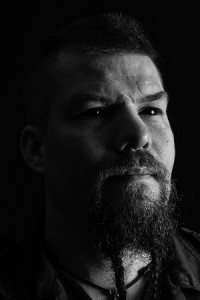 Last year, though, the stores tried to sell us the idea of thanksgiving.

Yeah. That’s not going to happen.

TODAY’S GIVEAWAY: Halloween Haunts contributor, James Kendley, is offering one e-book copy of his novel, The Drowning God. Enter for the prize by posting in the comments section. Winners will be chosen at random and notified by e-mail. You may enter once for each giveaway, and all entrants may be considered for other giveaways if they don’t win on the day they post. You may also enter by e-mailingmembership@horror.org and putting HH CONTEST ENTRY in the header.

MICHAEL KAMP is a horror writer from the frozen wasteland of Denmark. He is co-founder of the Danish Horror Society – a society of Danish horror authors dedicated to promote the genre as literature for adults. With 12 novels published, his work has won two awards so far, and he is eyeing the English market. His international web comic Monster is freely available here: http://www.fromthefrozennorth.com/publications/monster