Halloween Haunts: Crossing Over: Halloween and Ghosts by Lisa Morton 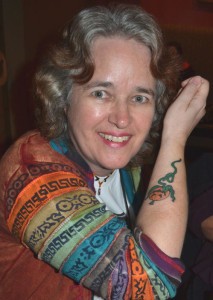 Ghosts have become one of Halloween’s most beloved icons, and each October we see them manifest in everything from terrifying haunted attractions to whimsical decorations. Haunted locations boast increased traffic, and ghost-themed movies scare up box office dollars. But were these elusive spirits of the dead always a part of Halloween?

The answer is a resounding “yes”.

Scholars are divided on whether Halloween derives more from the ancient Irish Celtic celebration of Samhain or the Catholic observance of All Saints Day (on November 1st)/All Souls’ Day (November 2nd)…but both of these festivals involve ghosts. Samhain was the Celts’ New Year, and as the border between years it was also thought to be a time when the veil between our world and the Otherworld was at its thinnest. Although visitors from the Otherworld were almost always the malevolent sidh (fairies), ghostly Samhain happenings are recorded in some of the great Celtic tales. In the epic Cuchulain of Muirthemne, the hero Nera is offered a gold-hilted sword if he will put a rope around the foot of a hanged criminal; when he does so, the corpse speaks to him and asks for a drink. If that sounds more like a revenant (undead corpse) than a true ghost, consider the later Irish tale “November Eve” (recorded by Lady Wilde in 1887), in which a man out after dark on Halloween encounters a great mass of people, and slowly realizes they are all ghosts. As the end of the story puts it, Halloween/Samhain was “that one night of all the year when the dead can leave their graves and dance in the moonlight on the hill, and mortals should stay at home and never dare to look on them.”

All Souls’ Day was added to the Catholic calendar throughout the western world by the fourteenth century, placed on the day after All Saints’ Day. Although the Church was supposedly responding to adherents who wanted to honor their own deceased loved ones as well as the saints, there is some speculation that the date might have been added after All Saints’ was unsuccessful in completely co-opting the celebration of Samhain. All Souls’ Day had a more macabre character naturally than All Saints’, since it involved praying for souls trapped in Purgatory, unable to move on to Heaven. In some areas, it was believed that those souls were released from Purgatory on this one night and returned to earth, so graves were cleaned and food laid out. In Mexico, where the celebration of All Saints’/All Souls’ combined with Aztec festivals celebrating the dead, elaborate home altars (ofrendas) are still laid out for the ghostly visitors, and typically include the departed loved ones’ photos, favorite foods, and even tequila.

By the time Halloween was well-established as its own holiday, it was firmly tied to ghosts. In his 1869 Book of Days, R. Chambers states that October 31st “is the night set apart for a universal walking abroad of spirits.” Sir Walter Scott’s 1820 novel The Monastery – which features a ghost called the White Lady – included a character who possessed a trait commonly ascribed to those who were born on Halloween: the ability to see and communicate with ghosts.

One of the more unusual ghost variants that was once a common feature of Halloween was belief in the “fetch” or “wraith” – the ghost of a living person. On Halloween, young people performed a variety of fortune-telling rituals which were supposed to reveal the identities of their future spouses, and in many of these the fetch of that person would appear (often in a mirror, although sometimes they were also said to just walk through the room). A fetch also might show itself (especially on Halloween) to a loved one to warn that the fetch’s owner was in lethal danger.
When Hallow
een crossed the Atlantic with Irish and Scottish immigrants and settled into America, it acquired a new icon: the jack-o’-lantern. However, a closer look at the carved pumpkin reveals that it is actually another Halloween ghost, derived from a classic folktale about a sinning blacksmith named Jack. In a 1904 summing up of Jack legends from Journal of American Folklore, William Wells Newell collects versions of the legend from Great Britain, Europe, and America, but notes that the story is essentially the same everywhere: Jack is a rascally blacksmith whose soul the Devil comes to claim when Jack dies. Jack manages to trick the Devil into a few more years of life, a feat he accomplishes two more times. Finally the day comes when Jack, now elderly, succumbs to death. Refused entry into Heaven, Jack goes to Hell, but the Devil – still angry at Jack for outwitting him three times – also denies him entry into Hell. The Devil reluctantly tosses Jack a burning ember from the fires of Hell, which Jack places into a pumpkin (or a turnip or gourd) and uses to light his way as his spirit wanders the earth. Jack is also the ignis fatuus (sometimes known as will-of-the-wisp), the mysterious light seen near swamps that leads unwary travelers to their doom.

In the twentieth century, ghosts and Halloween were tied together in decorations, in costumes (later commercially-produced masks and costumes advanced on the traditional use of a simple white sheet when masquerading as a ghost), and in art (see, for an early example, 1933’s Betty Boop’s Halloween, in which a bullying party guest is eventually chased off by comical ghosts). In the 1970s and ‘80s, when Halloween morphed from a children’s holiday back to a celebration equally enjoyed by adults (thanks in part to the massive success of John Carpenter’s seminal slasher flick Halloween), ghosts were right there again, with the explosive growth of Halloween haunted attractions. Although Halloween’s haunted houses usually rely more on monsters than translucent, ephemeral spirits, there’s no denying that the haunted attractions industry owes both part of its name and its origins (Disneyland’s Haunted Mansion, which features “999 happy haunts,” is often mentioned as the first modern haunted attraction) to ghosts.

TODAY’S GIVEAWAY: Lisa is offering one signed copy of Ghosts: A Haunted History. Enter for the prize by posting in the comments section. Winners will be chosen at random and notified by e-mail. You may enter once for each giveaway, and all entrants may be considered for other giveaways if they don’t win on the day they post. You may also enter by e-mailing membership@horror.org and putting HH CONTEST ENTRY in the header.

For more information, please visit her at http://www.lisamorton.com or http://halloween.guru for more about Halloween.

2 comments on “Halloween Haunts: Crossing Over: Halloween and Ghosts by Lisa Morton”