Halloween Haunts 2013: Welcome to the Neighborhood By Yvonne Navarro

About three years ago The Husband (author Weston Ochse) and I made good on our talks about downsizing and wanting to move back into a town neighborhood as opposed to the rural house we’d been living in for more than six years. We signed papers, coughed up money, had some sleepless nights, and the following November (two years ago next month) we moved into our newly built home in Sierra Vista proper. One of our wishes was to be smack in the middle of all the fun decorating for holidays. Halloween especially: the ghosties and goblins hanging from trees, carved pumpkins, crazy lawn decorations, and, most of all, trick or treaters. In more than half a decade of living at our old home we’d had one, count it—one—trick or treater, and that was way early in the years we’d lived there. No one ever saw our big stone gargoyle by the front door, or any of our Halloween decorations. Where was the fun in that? Well, besides me having to eat four huge bags of Smarties all by myself. But I digress. After all, we’re both horror writers. We want to participate in the evil fun, get right in the muck of it. We want to dress up like zombies and fling open the door—if those bright-eyed candy seekers think they’re going to get grandma and grandpa passing out smiles with their candy… let’s just say they’re in for a freaking big surprise come October 31st!

So, fast forward to the Halloween Season of 2012. First Halloween in the new house. The decorations are up, and we have done it right. We have a huge metal pumpkin out front with an electric candle in it. We have a crazy spooky ghost—five feet long—hanging from the  front porch. We have lights and black cats and skulls and spiders and webs (Oh my!) and all kinds of great stuff. We are ready. 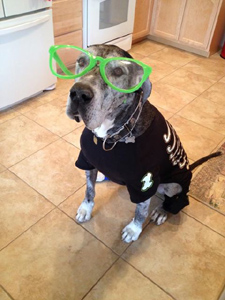 Then The Husband goes TDY.

For those not familiar with the military lifestyle, that’s a loose acronym for “temporary duty,” and it also includes the silent word elsewhere (kind of like the silent e at the end of a word). Wes’s job sent him off to the east coast over Halloween and left me to deal with the trick or treaters in our new neighborhood.  No problem, I thought as the doorbell rang for the first time. I got this.

Sixteen POUNDS of Smarties and five hours later, I’m thinking about applying for a gated retirement community where no one under fifty-five is allowed to breathe, much less actually live. Moving here had to be Wes’s idea, because I would never be so foolish as to want this kind of non-stop insanity. I’ve seen every possible cute monster and terrifying box creature that can exist, plus butterflies, robots, princesses, vampires, fairies, ghosts, zombies, superheroes, tigers, unidentifiable blobs, and, of course, bored parents. My feet are sore, the sound of the doorbell has wedged itself into one ear drum while the other has been hammered to pieces by the constant barking of our three (yes, three) Great Danes. Who, by the way, all refuse to keep their blinking, bouncing-on-springs, mini-skull headbands on. Seriously, how is it my fault the plastic headbands feel weird to them? Be flexible. Go with the flow already.

Speaking of flow, on October 25th The Husband flows back home from an Uncle Sam-sponsored six-month all-expense-paid trip to Afghanistan, just in time to help out with the costumed hordes for 2013. A good thing, because I was going to cancel the holiday rather than face a second one in this house by myself.

And that would be a real shame since I have nerd costumes ready for all three Danes to wear. 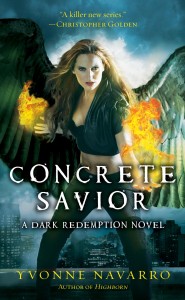 AY: Journalstone Publishing, one of Lisa’s publishers, is offering a half-page ad in the January 31 issue of Dark Discoveries and a medium sidebar ad on Hellnotes.com.

YVONNE NAVARRO lives in southern Arizona and works on historic Fort Huachuca. She’s had twenty-two novels and well over a hundred short stories published, and has written about everything from vampires to psychologically disturbed husbands. Her work has won the Bram Stoker Award plus a number of other writing awards. Visit her at www.yvonnenavarro.com or on Facebook to keep up with a crazy life that includes her husband, author Weston Ochse, three Great Danes (Goblin, Ghost and Ghoulie), a parakeet named BirdZilla, painting, and lots of white zinfandel. Her most recent novel is Concrete Savior, the second book in the Dark Redemption Series, plus she writes a quarterly column called Double X Chromosome for Dark Discoveries magazine. You also never know when another novel will pop out of her head.

8 comments on “Halloween Haunts 2013: Welcome to the Neighborhood By Yvonne Navarro”