Year after year, various online periodicals compile lists of the best video games to play during the month of October. Typically, these articles mostly adhere to listing universally renown survival horror titles from popular franchises such as Resident Evil, Fatal Frame, Silent Hill, Dead Space, Alone in the Dark, and Dead Rising. While these games are scary in their own right and are perfect to celebrate a month of frights, they all have one thing in common: none of them take place on Halloween. In reality, while there is an abundance of horror games out there, across a variety of gaming platforms, finding titles that actually have Halloween as their setting are few and far between.

This article is an attempt to aggregate Halloween-centric video games for the current generation of consoles. While there are older games out there (such as an Atari adaption of John Carpenter’s Halloween), this list presents three games that are readily accessible to the modern gamer. 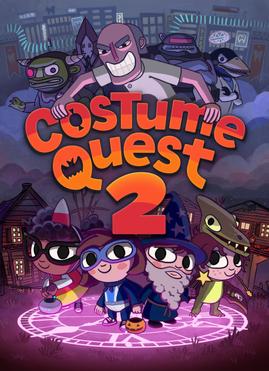 The Costume Quest duology is the quintessential Halloween video game series. Developed by Double Fine Productions, Costume Quest 2 is an action RPG that picks up where the first game left off. CQ2 stars a group of tricking-or-treating children who stumble their way through portals to a variety of worlds in the future (where Halloween has been outlawed) to combat the evil dentist, Dr. Orel White.

The combat is a classic turn-based system (think classic Final Fantasy games), where the player selects each character’s action or attack. Completing each battle awards experience, which causes the characters to level up, gain additional powers, and so on. Trying on different costumes awards the character different abilities. CQ2 has cartoon-ish graphics that gives the game a child-like charm. Navigating the levels is in the vein of The Legend of Zelda: A Link to the Past, where the party can talk to neighbors and hit obstacles with their trick-or-treat bags or use abilities related to their costumes to solve puzzles.

Haunted Halloween ‘86: The Curse of Possum Hollow is Retrotainment Games’ sequel to their Haunted Halloween ‘85, an 8-bit, 2D platforming, side scrolling brawler (akin to games such as Double Dragon and Streets of Rage).  HH86 stars Donny and Tami, teenagers of Possum Hollow, who are about to start the evening trick-or-treating back in October of 1986. After being dared, the duo go off to explore a farmhouse that had experienced strange sounds and lights the night before. Upon entering, a monster shows up and the floor gives way, pummeling the two into the dungeon below.

From that point, the player is able to alternate between Donny and Tami as they set off across six chapters of varying lengths: the dungeon (with cells, toxic sewers, caves and mines), the river (a large boat and a pier), the steel mill, a train yard, the outskirts of town, followed by the streets of the town proper and back to the farmhouse. Along the way, the two procure pieces of a map and unlock additional moves (such as double jumps, dashes and charged attacks) while combatting skeletons, rock monsters, bats, slime monsters, janitors, and other spooky denizens. The game is challenging at times, but offers plenty of extra lives and continues via a password system. The graphics recall traditional 8-bit style (think aesthetics of Castlevania: Simon’s Quest meets River City Ransom), and HH86 rocks a catchy bitpop soundtrack.

In a true retro fashion, aside from being available digitally on the Xbox One marketplace and Steam, Haunted Halloween ‘86 is also available in cartridge form for the NES.

B:AK is an open world superhero game, think Grand Theft Auto, only with Batman. As the caped crusader, you travel along the streets (or rooftops) of Gotham (on foot or via the Batmobile), getting into combat with criminals and triggering missions, both side quests and the main plot. The gameplay straddles combo-based melee combat, stealth missions, investigation scenarios, and even pursuit missions in the Batmobile. While the game is not horror-oriented, the version of Gotham in this game takes many cues from the Tim Burton-era of films, with its art deco architecture, dark, cloudy, stormy night, and gritty streets. Gotham is a huge city to explore, and the free-roaming aspect of B:AK makes it truly adventurous.

Batman: Arkham Knightis available on the Xbox One, Playstation 4, and on Windows.

Bio: Nicholas Diak is an academic writer of pop culture studies. He specializes in Italian genre films, the sword and sandal genre, retro-ism, industrial music, and H. P. Lovecraft. Along with Michele Brittany, he is a co-founder and co-chair of the Ann Radcliffe Academic Conference. He is the editor of the book The New Peplum: Essays on Sword and Sandal Films and Television Programs Since the 1990s and has contributed essays to a variety of websites, journals, and other academic anthologies. He can be found at nickdiak.com.