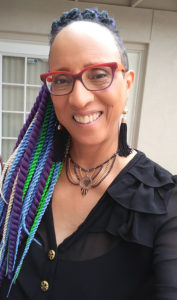 I became an active member in July 2000. I waited, in particular, to use my poetry credits because it was important for me to support the HWA poetry initiative, even though I had earlier fiction credits.

2) How did you serve the HWA and for how long?
I’ve been on the Board of Trustees since 2009 (and contributed an article for the From the Trenches column each year) and an official Mentor 2015, 2017, and 2019, as well as several HWA Bram Stoker juries.

In 2019, I edited the StokerCon Anthology, which was a lot of work, but so worth it.

3) Who were/are your biggest influences?
That is a long list of people. The first person that influenced me to write is my mother. She was a fantastic storyteller and would entertain the nine of us with fables she made up. This made it feel very natural to create stories for me. Also, two strong female characters from the Star Trek television series were huge influences: Uhura (Nichelle Nichols) as the first Black female officer in a SF series and Christine Chapel (Majel Barrett) whose character said more with a look than words.

When I was in high school, I loved Maya Angelou, Ralph Ellison, Toni Morrison, Alice Walker, James Baldwin, Eudora Welty, and Langston Hughes because of the music in their writing. In college, I discovered genre writers Isaac Asimov, Anne McCaffrey, Robert Heinlein, Octavia Butler, Nancy Kress, and Connie Willis. In horror, some of my female influences were Anne Rice, L. A. Banks, Elizabeth Massie, Marge Simon, and Charlee Jacob. Looking back, I see that I read more male SF and horror writers than female because the field didn’t have as many in print as they do now and even fewer Black female writers.

When my story was published in Sheree R. Thomas’ Dark Matter anthology in 2000, it gave me so much exposure and made a huge difference in my career. Others lifted me up with their belief in my writing early on: Jack Ketchum, Terry Bisson, Nancy Kress, Straub, L. A. Banks, Douglas Clegg, and so many more…

4) Was there ever a time you felt being a woman affected your career (for better or for worse)?
Early in my career, I was very aware of the lack of women authors in genre writing. I began feeling sensitive about my first name Linda being a possible issue. I had taken a workshop with Nancy Kress in NYC, and afterward, I asked her about using a pen name (L.D. Addison) to not highlight my first name so that editors wouldn’t always assume the main character was female. She basically said if I wrote well enough they wouldn’t make that assumption. I took that advice to heart and worked on writing better.

After that, I stopped worrying about my name, being female, or the fact that there weren’t many Blacks in genre, and spent more time writing, increasing my writing skills, etc. while working a day job and having a family.

When an opportunity comes to help shine light on Others, I take it. I’ve had many professionals help me along the way.

5) Do you feel women’s role in the horror genre could be improved? If so, how?
There’s so much that needs to be done with published work to represent women and Others (race, sexual orientation, etc). I have often said that the gatekeepers, those who decide who will be published, have to be aware that the world needs representation. It will take work on their part to make sure that other voices are published, and not default to business as usual. Part of the work means having an editorial staff that reflects the different voices in the world. Mindfulness and work.

An example of this is the anthology The Twisted Book of Shadows, where editors Christopher Golden and James A. Moore used a diverse editorial committee and blind submissions to select stories.