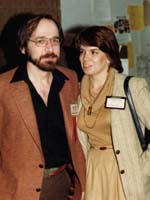 When did you join the HWA?
I joined the organization when it first started … back when it was H.O.W.L.

How did you serve the HWA and for how long?
I started out doing the market report for the newsletter years and years ago–well, decades! At the time, I was doing my monthly market newsletter, The Gila Queen’s Guide to Markets, so that was a logical extension when I stated compiling markets for the HWA Newsletter. Then sometime later, I was asked to edit the newsletter. I was also a mentor for a very long time.

Who were/are your biggest influences?
Actually, it’s hard to say. I came out of a journalism background, and I had not read heavily in the genre when I started to write … I tend to like quiet horror or atmospheric writing, although that’s not really what my stuff is like. And we all know who was a leading proponent of quiet horror. My late husband, Charles L. Grant (better known as Charlie) encouraged me, and I also learned a lot about the field from him. It’s good to have had an award-winning writer to talk with. But I wouldn’t count him as an influence … his writing and mine were so far apart.

Was there ever a time you felt being a woman affected your career (for better or for worse)?
No, I don’t think it has been affected adversely. I started out in historical romances, then eased into horror … When I started in horror, there were not a lot of professional women horror writers … That’s one of the reasons I edited Women of Darkness and Women of Darkness 2. I knew there were women horror writers out there … and I wanted to showcase them. I think that too many people didn’t think women could write horror back then. I think they’ve realized they were mistaken!

Do you feel women’s role in the horror genre could be improved? If so, how?
I think women just need to keep submitting stories and poems and art and novels … And they can’t take no. I know a lot of writers who get very discouraged by a rejection or two rejections or ten … And you can’t. You just have to keep going. If not else, wear down the people who keep saying, “no.”