Halloween Haunts: How to Enjoy Halloween in Quarantine

These are strange and terrifying times, my friends, but not the good kind. Not the kind of strange and terrifying when a full moon shines down on twenty-five hours of Halloween mayhem as the bars fill with grotesque creatures and the streets fill with hungry little monsters. Who knows what Halloween will bring us in this, our year of the pandemic? Perhaps the streets will be empty and hauntingly quiet; perhaps you would prefer to be safe in your home. Even so, let us not mourn the loss of this year’s Halloween, but find creative ways to enjoy it. Yes, we all know that we can spend this year watching scary movies, drinking apple cider, and carving pumpkins, as usual; but is there anything else can do to take full advantage of this wonderful day of the year despite the current state of the world? I think so.

Here are some ideas to make the most of a quarantined Halloween:

Gather your friends on Zoom for a socially distanced party where each will have the opportunity to show off the costume they scrounged up from spare things lying around. Encourage an adherence to DIY: there’s no need to go shopping at a non-essential store when you can rig up something on your own. Besides, a crafting project can be a great way to pass the time while stuck at home. Use Zoom’s chat feature to cast votes for the best costume, and at midnight, declare a winner! If everyone is able to chip in a few bucks by Venmo, send the winner a gift card as a prize; you can keep it completely hands-off by sending an Amazon gift card via text message.

Get everyone on your street to decorate the outside of their houses. Even better if every house gets its own theme! One could be strewn with zombies feasting on severed limbs; another might boast a haunted graveyard on the lawn; how about one that seems to be in the midst of conducting a folk horror ritual, complete with a yard-sized wicker man? Then, take a socially-distanced walking tour of the street to admire these home haunts.

This one is for any parents wondering what to do with the kiddos who were hoping to go trick-or-treating. Set up a scavenger hunt in your home or yard, with a little bowl of trick-or-treat candy for a prize at the end. Blindfold your (hopefully non-squeamish) kids and have them stick their hands in a bowl of peeled grapes (eyeballs) or spaghetti (worms) to get the next clue; have them find a plastic spider hiding in the gauzy white cobwebs; there are plenty of possibilities here which can keep both parents and kids entertained.

Sure, we can carve pumpkins on any old Halloween, but this might be the perfect year to use social media to our advantage. Just take a photo of your Jack and post with the hashtag #jackolantern2020; then follow the hashtag to see everyone else’s creations!

who is bound to its former abode, and now you are haunting your own home. Stand ominously at the window, staring out. Lock eyes with anyone who passes. Create a backstory for how you died, and leave clues that can be seen from the windows. Invite your neighbors to look in and try to solve the mystery of your death.

Bio: Jo Kaplan writes and teaches in the Los Angeles area with much encouragement from her husband and two cats. Her fiction (sometimes as Joanna Parypinski) has appeared in Fireside Quarterly, Black Static, Nightmare Magazine, Vastarien, Haunted Nights edited by Ellen Datlow and Lisa Morton, Don’t Turn Out the Lights: A Tribute to Alvin Schwartz’s Scary Stories to Tell in the Dark edited by Jonathan Maberry, and the Nightscript series. Her novel, It Will Just Be Us, came out September 8, 2020. She teaches English and creative writing at Glendale Community College.

IT WILL JUST BE US by Jo Kaplan

They say there’s a door in Wakefield that never opens…

Sam Wakefield’s ancestral home, a decaying mansion built on the edge of a swamp, isn’t a place for children. Its labyrinthine halls, built by her mad ancestors, are filled with echoes of the past: ghosts and memories knotted together as one. In the presence of phantoms, it’s all Sam can do to disentangle past from present in her daily life.

But when her pregnant sister Elizabeth moves in after a fight with her husband, something in the house shifts. Already navigating her tumultuous relationship with Elizabeth, Sam is even more unsettled by the appearance of a new ghost: a faceless boy who commits disturbing acts—threatening animals, terrorizing other children, and following Sam into the depths of the house wielding a knife. When it becomes clear the boy is connected to the room with the locked door, Sam realizes this ghost is not like the others. This boy brings doom…

As Elizabeth’s due date approaches, Sam must unravel the mysteries of Wakefield before her sister brings new life into a house marked by death. But as the faceless boy grows stronger, Sam will learn that some doors should stay closed—and some secrets are safer locked away forever.

“This novel is so clever and effortlessly atmospheric it deserves to find a wide audience beyond the traditional horror crowd… Highly recommended.”
—HorrorDNA

Read an excerpt from It Will Just Be Us by Jo Kaplan:

I was there for hours, hiding among the white-sheeted shapes of old furniture, playing with the steel string. Beyond the arched window the sun set, plunged me into nightfall. No one came to find me. No one called me down for dinner. My stomach grumbled, and I crawled out from under a sheet covering an old piano, accidentally taking it with me in a plume of dust. The ancient piano with its yellowing keys grinned back as the falling sheet plinked out a few sour notes.

Worried that Mother had heard—that she would come yell at me for my music, too—I threw the sheet back over the piano and crept out of the room, peering around for any sign of her. The hall was dark with dusk.

No one was in the kitchen. I was hungry, but I didn’t know how to cook anything, not really, so I went looking in my mother’s favorite drinking spots. In the lightless parlor, I saw someone sitting on a chair against the far wall. “Mother?” I called out. “I’m hungry. Can we eat now?”

“Please?” I stumbled around, feeling the wall. “Can you turn on the light?”

She was laughing low, in the back of her throat, a terrible old chuckle, and suddenly I thought, this is not my mother. Instead of searching for the light switch, I fell back against a curtain and dragged it open, filling the room with uneasy twilight.

She sat in a wheelchair—an old woman, older than my mother, with black Xs where her eyes should be. Her hands were plagued by fingers bent and crooked as if broken and allowed to heal at contorted angles, and though her lips were sealed shut, she was laughing still, that dark chuckle behind closed lips. Gray wisps of hair wilted against her gaunt face. Her feet were bare, wrinkled, callused; she was missing several toes. A scream rose in my throat, trapped behind my tonsils.

Today, October 2, 2020, Jo Kaplan is giving away a signed hardcover copy of IT WILL JUST BE US.

To enter a drawing to win a copy of IT WILL JUST BE US, send an email by midnight (12:00am PST) tonight to HalloweenHaunts2020@gmail.com. 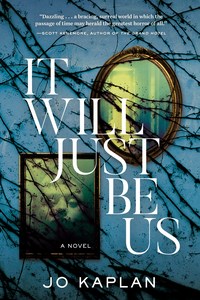