Halloween Haunts: Once in a Blue Moon

Those of us who live for this time of year when we can be someone or something else without raising eyebrows, know full well, Halloween is a day unlike any other. I suspect most HWA members are card carrying night people to some degree. This year Halloween and a full moon crash into our lives on the same day! Can you believe it?

Some people might treasure the full moon the way the heretic pharaoh, Akhenaten (1350 BC) adored the sun. He tried to convert Egyptian society to worship and bring into daily life, the God RA (The Sun God). How successful was his effort? Upon his death, all remnants of his name, his city (Aten) and RA, as the monotheistic deity of worship, were expunged from Egyptian society. His city was destroyed, and the heart of Ancient Egypt was moved back to Thebes (known today as Luxor, Egypt). Akhenaten was famous for one other thing: before he changed his name, he was known as Amenhotep IV, who happened to be the father of Tutankhamun, or who is better known in pop culture as, King Tut. Crazy, right?

Enough ancient history. There is an added bonus in October this year. The moon will be full twice this month! And for the “pièce de resistance,” the moon in all its full orb glory, will occur on Halloween! The last time this happened was approximately eighteen years ago. This reminds me of Ray Bradbury’s short story, All summer in a day. Wherever you live, keep your fingers crossed, pray to the demon Pazuzu, sacrifice a small toy animal, pray, wish or hope the skies above you are free of clouds or other environmental obfuscations that would prevent you from celebrating the full moon on Halloween. It would be a true tragedy if you are robbed of the experience.

Just for fun some of you may want to be ready for the full moon of your future. If you would like to calculate when the moon will be full for the rest of time, there is a mathematical formula that goes something like this.

Luckily for us, adoration of the full moon on Halloween doesn’t require a calculation. A full moon occurs roughly every thirty days and to the naked eye, the moon appears full for two or three days. Actually, the moon is “full” for the briefest of moments. As soon as the moon waxes full (100% illumination from the sun), waning begins, though it is so miniscule, it’s imperceptible. Those of us who let out a huge “sigh” upon gazing at the full moon take heart in the way our naked eye allows us to see the moon as full for a few days.

So, this year squeal with delight, the full moon will occur on the one day we look forward to every year, October 31st Halloween! 2020 has been a year unlike any other we have experienced in our lifetime—let’s celebrate the collision of these two events like there will be no tomorrow.

TODAY’S GIVEAWAY: Lou Rera is giving away one (1) paperback and one (1) epub copy of his 2020 collection of short fiction, AWAKE: Tales of Terror. Email HalloweenHaunts2020@gmail.com with the subject title HH Contest Entry for a chance to win.

Lou Rera writes horror, supernatural crime and subjects that delve into the darker side of humanity. He is the author of AWAKE: Tales of Terror, a collection of thirteen short stories (2020) and, SIGN, a supernatural thriller of deception and murder (2014). He is an active member of the Horror Writers Association (HWA), Short Fiction Writers Guild and IMDB. His short stories have appeared in the anthologies, Group Hex Vol 1 and Vol 2.  His collection of flash fiction, There are no doors on a cocoon, was published in 2008. Lou writes occasional reviews for Horror Novel Reviews. 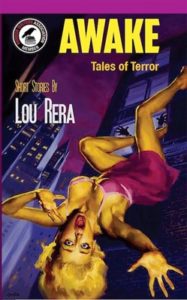 A six-year-old boy scrambles to escape a maniacal woman hell-bent on killing him • Revenge becomes the motivation for a scarecrow suffering abuse at the hands of man. • The mayor of a small-town dips his hands in the town’s coffers once too often. These tales and ten other stories will keep you up at night wondering who might be lurking outside your door.

AWAKE: Tales of Terror, by Lou Rera is a collection of thirteen nail-biting stories that delve into a dysfunctional world that confronts everyday people and their lives with one unmistakable conclusion: bad things happen to good and BAD people!

“…What we have here is a stellar collection of stories. They are all sharply written, chilling, and downright clever…” Jenelle Jansen 2020