Heh…heh…he…The wind is starting to blow. The bats are flapping around in the moonlight. Distant howls from wolves can be heard late into the night. Ah, yes…it’s Halloween time once again! And what better way to spend the witching season than by spinning some dead wax! Although I am a horror writer, I also have a radio show called the Record Graveyard where I play the vinyl records I collect as the Crypt-Keeper. In 2013, I shared some of my favorite Halloween records as part of the HWA Halloween Haunt (HWA 2013). Now I have risen from my tomb for a second installment.

As with my previous post, I have broken this post down into a few categories that exemplify the type of tunes available to spin at Halloween parties, or just even a night at home. All of these records are 45rpm 7” inch singles released between 1956-1966.

What better way to spend a fun evening than by attending a party with some cool ghouls. Here are some discs that epitomize the social aspect of being a monster looking for a good time.

Great sax driven rock’n’roll platter. Singer sets us up with great descriptions of a haunted house on a hill that is filled with monsters dancing inside. All of the Universal monsters are seen dancing with zombies. Groans and screeches add to the flavor of this amazing rocker that is high on many DJ lists. The B-side is pretty cool too.

hanging out at a wild dance party. Even Vampira is mentioned as she is seen drinking a bucket of red paint! Lots of demented laughter permeates this piano rocker with R&B singing. This one will get severed toes tapping again! 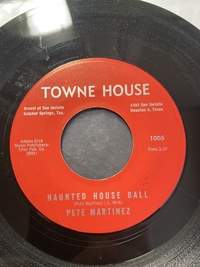 This light rocker starts with a coffin opening and then a narrator starts to relate how he was out walking late at night and goes into an old mansion to escape his fright. Inside he finds monsters who have a band and he joins in on bass and falls in love with the scene as monsters dance and have fun while the house shakes. He permanently joins the monster band and the song ends with the sound of a coffin lid closing. Did he become one of the undead?

This is a nice rockabilly stroller that is all about the Teen-Age Werewolf taking Dracula’s daughter (named Betty Vampire) to the hop. They danced and drank tequila all night long. Other dancing monsters are also name-checked on this cool piece of vinyl that is a little bit country and a little bit rock’n’roll.

Sharkey Todd and his Monsters “The Horror Show” (Capitol, 1959)

This upbeat rocker is all about a guy who likes to go to horror shows, but his family turns out to be the real monsters. His mother-in-law turns into a werewolf, his wife turns into a vampire, and his sister turns into a weird green monster! Screeches and howls abound as this disc spins into the break. Eventually all of his relations get moved into the cellar where he can see his own horror show any time he likes!

Besides monster dances and horror shows, spooks like to haunt cemeteries and old houses even when they are not in a festive mood. Here are some wax offerings about those haunted places. 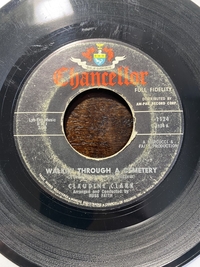 Mrs. Clark was a funk/soul/R&B singer from Philadelphia who had a #5 hit single. Party Lights, in 1962. This disc came out the same year. With back-up singers, and a groove sounding straight outta Motown, she gives us a scary tale of her walk through a cemetery late at night and all the noises she heard which made her run. Demented sounds can be heard from weird critters that jump up in front of her as she tries to get through the cemetery. If you like the Motown sound, this R&B workout will not fail to delight at Halloween.

Fairly mellow rockabilly disc about Bill moving out of his haunted house while a spectral voice tells him that he “better run.” Sounds a bit hick, but has a nice upbeat tempo, but not a scorcher. 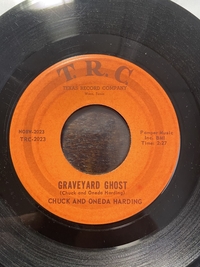 Weird laughing and sounds abound as the ghost discusses how he plans to scare people. The ghost says you won’t get away as he will scare you with his crazy actions including eating a brain, showing off a skeleton with a severed head, and other weirdness. Being forewarned is helpful to being forearmed so don’t let this slow demented clunker set you back too much of the long green.

Everyone seeks some love in their life. Monsters are no different. Just think how different the story of Frankenstein’s creature would have been if just one gal showed him some lovin.’ Here are a few discs that show how love and horror may be intertwined. 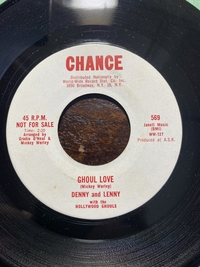 Denny and Lenny with the Hollywood Ghouls “Ghoul Love” (Chance, 1963)

Admittedly this 45rpm could have been listed under the Horror Hops section as this song is a fun mid-tempo R&B workout about a monster party. The title does betray that this song is more about misunderstood monsters finding their mate…their ‘Ghoul Love’ out on the dance floor. Nice breezy dancer with some monster name checks. 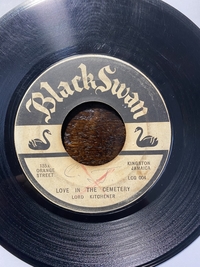 Jamaica loves horror too! Lord Kitchener delivers a fine calypso style horror tale about a young man trying to make whoopee with a gal pal in the cemetery and spooks scaring him into running off instead! He runs from the dead and out of the cemetery only to run into another undead on the city streets causing him to run even more. No lovin’ for this guy, only fright.

Ah, now this is a great love song between a witch and a young man. The witch has chosen the young man to be her consort and  that’s all there is to it. He describes her as a hag in a cemetery, but he knows he can’t get free from her. He even runs home and she comes through the walls telling him that she will be the bride and he will be her groom! She put the whammy on him and he’s stuck! I think many married men can relate to this song.

Who doesn’t love a star! We simply adore our favorite celebrities, TV shows, and films. Here are some Halloween scare platters that keep us in touch with the entertainment side of horror. We all know horror hosts such as Elvira, Vampira, and Zacherle, but what about the many others? Do you know about Morgus the Magnificent? Morgus was a TV horror show host (played by actor Sidney Noel Rideau) who was active from the 1950s through the 1980s. In 1959 his TV show “House of Shock”, which only played old horror films, was based out of New Orleans. In 1964 he moved the show to Detroit, Michigan and changed the name to “Morgus Presents.” Eventually his show returned to New Orleans where it continued and eventually went into syndication in 2005. Morgus, well…Sidney…passed away August 2020 from natural causes at the age of 90. He never stopped believing in his creation and lived for horror! Here are some discs that he made during his heyday as a creature feature horror host with the most!

Okay, this is not a dancer or a rocker. This is a strict novelty record. Morgus introduces his show and a slow eerie dirge plays for a few minutes until Morgus comes back and closes out the show. The flip is a gruesome attempt at graveyard poetry titled “Hearsery Rhymes.” This one is strictly for horror completists.

Morgus and the Ghouls “Morgus the Magnificent” (Vin, 1959)

Ah! This is the one to get! Morgus interjects his vocals over some fine frat rock sax workout. This one is all about Morgus and his House of Shock! Nice rocker/dancer. Not too much on the scare factor, but a great send up for the almighty Morgus and his power to scare with his show.

Morgus with the Daringers “Werewolf” (Fulton, 1959)

Okay, maybe this is the one to get! I actually love the B-side, “The Morgus Creep” which is an eerie rock instrumental credited to just the Daringers, but it’s the A-side which features Morgus and his horrific brand of lunacy mixed with fast rock’n’roll. The Daringers tear up their guitars as Morgus narrates a bloody tale of monsters interacting with beatniks. Is he a werewolf or just a beatnik? Whatever…there is some blood and rock’n’roll for all in this frenetic driver.

Morgus the Magnificent “The Theme from the House of Shock” (Shock, 1959)

I don’t have this one. Please send me your copy so I can hear it and talk about it.

This is a special all-zombie section because…well…why not! The Walking Dead is going into their last season so let’s give zombies their due and recognition one last time. Hurrah!

Hickish garage rocker about a guy that wants his gal to come back to him, but when she does, she is a walkin’ talkin’ zombie! Great rocker with good guitar riffs and ‘zombie’ voices with some nods to the jungle. 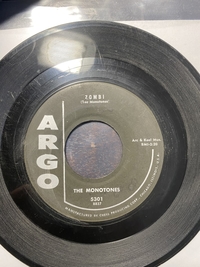 Doo wop stroller from this R&B group who were better known for their 1957 mega-hit “Book of Love.” This 45 is about a young man who talks about his love and how he will never let that love go. There are some ghostly howls as the background singers keep mentioning ‘zombie,’ but it is not a real spooker. This is a nice eerie doo wop, but that’s about it. 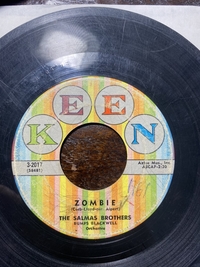 Voodoo…zombies…she has two eyes red with fire! This is a fun R&B mid-tempo dancer about a girl who is a zombie and has the power to turn others into zombies! Some guitar, lots of horn, and zombie voices. Catchy vocals deliver a fun little platter that will get your bones twitchin’!

Fun calypso record (remember calypso music from Beetlejuice?)! This one is about a zombie jamboree happening at a cemetery in New York! The narrator does not want to become the groom to a zombie trying to offer him wine and her ol’ bones, but guess what…she wins him over with a kiss and he can’t believe he has a zombie for a wife! Totally fun calypso groover.

Dr. Greg McWhorter is an educator and writer who resides in Southern California. Since the 1980s, he had worked for newspapers, radio, television, and film before entering the field of education. He has been a guest speaker at several universities, TV shows, film documentaries, conferences, and the San Diego Comic-Con. Over the past few years he has had two books published of his fiction work.