Halloween is horror movie season. Actually, I enjoy horror movies year-round, but when Halloween draws near, I marathon my favorites. As a child, I’d watch my favorite films (mainly Universal) throughout October to get into the spirit of the season, sorting them by categories and devoting entire days to vampires, werewolves, haunted houses, etc.

Nowadays, I need to begin watching my extensive collection in August and usually don’t finish until early November. I’ve also switched to viewing the most recent releases first and working my way backward to The Cabinet of Dr. Caligari. Doing so allows me to observe how the genre has evolved. I can follow different trends over time, see how story and character tropes are adopted or adjusted, and recognize how one film influenced another. 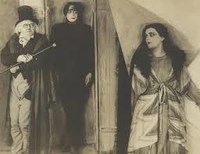 I first watched Caligari at eleven years old out of curiosity and respect. I’d read it was the first full-length horror movie and naturally wanted to see where the fun all began.  I was underwhelmed. The simplistic story of a sideshow hypnotist and his sleepwalking thrall terrorizing a little village wasn’t scary or particularly suspenseful, and the twist ending  disappointed. Visually, it wasn’t very attractive either. At the time, I didn’t understand the off-kilter buildings were supposed to create a psychological effect; I just figured the filmmakers couldn’t afford a proper set. Nevertheless, I kept it in my rotation and gradually learned to respect it. Caligari is one of the most influential films in the genre: traces of it can be seen in everything over the next century, from Expressionist scenery, to mad scientists, serial killers, and surprise endings.

Caligari premiered in 1920: we’ve now had one hundred years’ worth of horror movies to enjoy. To mark the occasion, I’m highlighting one film from each decade. These aren’t necessarily the best films of their respective age, nor my favorites, but I believe they’re noteworthy and hope you’ll agree.

The Phantom of the Opera (1925) is best known for Lon Chaney’s frightening make-up. Self-designed and self-applied, consisting of wires and stuffing, it was allegedly extremely painful, yet worthwhile for its indelible effect on audiences. The early use of color in the masquerade sequence is also notable.

Though Phantom is classified with the Universal Monsters, it isn’t a traditional monster movie. Erik may be hideous but he’s only human. Rather, it’s an early stalker film in the vein of Fatal Attraction. Erik’s obsession with soprano Christine, and his mercilessness in pursuing her are as frightening as Dracula’s vampirism or Talbot’s lycanthropy.

Shot simultaneously with Tod Browning’s beloved film, during the night after Lugosi, et. al. had left, George Melford’s Spanish-language Dracula (1931) is even spookier and more satisfying. Beginning with opening titles that show a guttering candle instead of a static illustration of a bat, different camera work and special effects create an eerier ambience for the movie. For one thing, we never see Lugosi rising from his coffin, but Carlos Villarias does several times, always accompanied by a cloud of fog.

The biggest difference is in the actors’ style. The Anglophones are affected and formal but the Latin cast emotes more naturally. Without reading the subtitles, I can read the characters’ body language and listen to the cadence of their voices. Some choices are jarring, but they make for a fascinating comparison.

Spanish Dracula runs an extra half-hour, allowing for loose ends to be tied up (the heroes actually dispose of Lucia in this version) and back-stories to be fleshed out. Part of that time also includes more leisurely interpretations of the original scenes, consisting of lengthier interactions and more pleasantries that reflect the slightly different cultural norms of the target audience. It’s a fascinating movie and holds up well in its own right as well as in comparison to the standard classic.

As Universal’s monster franchise became increasingly unimaginative and cheesy, RKO released a series of sophisticated, often ambiguous thrillers produced by Val Lewton. Instead of being a superficial copy of The Wolfman with panthers and a female lead, Cat People (1942) is a moody, psychological film where you don’t see the monster onscreen and can’t even be completely sure if there is one. Director Jacques Tourneur employs skillful camera work and shadow play to suggest something otherworldly is afoot, never quite giving the payoff the audience anticipates, but never disappointing it either.

I remember watching this at age eleven and waiting for something “good” and “scary” to happen, but even the tense scenes in the pool and the final confrontation between Irena and Dr. Judd were nothing like what I had come to expect from Universal. Nevertheless, I was spellbound. Most of the movie deals with Irena’s internal conflicts, the Reeds’ marital problems, and the culture clash between husband and wife, none of which were relevant to my life, but the underlying horrors—self-loathing, unfulfilled expectations, anhedonia—are relatable. Further, Simon makes Irena a sympathetic, tragic figure, and a victim of fate rather than a true monster.

Forget Hammer, atomic mutants, and things from outer space. One of the most chilling films of the 1950s was an adaptation of M. R. James’s story “Casting the Runes” called Night of the Demon  (1957) in the U.K. and Curse of the Demon in the U.S. The U.K. cut, is slightly longer with additional scenes that round out the characters and elaborate on the story. Above all, they add greater atmosphere to the film.  Again, Tourneur’s use of shadows and suggestion enhances the scare factor, but the prospect of imminent death for the protagonist is frightening on its own. Prof. Holden’s journey from skepticism to belief occurs through a series of unsettling, yet ambiguous incidents. Even the ending is left somewhat open. It’s a sophisticated film that deserves to be better known.

William Castle’s reputation is based on his showmanship, not his films. His gimmicks (e.g., electrified seats, life insurance policies, and in this case, special 3-D glasses) overshadowed the plots of his low-budget movies. His movies weren’t necessarily bad, however, they’re generally regarded as “camp,” “schlock,” or relics of an old-fashioned horror from the days before the genre became political and provocative. Well, I say there’s nothing wrong with that. Castle’s movies reflect a more innocent period when horror was fun, and 13 Ghosts (1960) is one of the best.

I saw 13 Ghosts when I was about the same age as the child protagonist, Buck, and I loved it. The movie was more exciting than scary. I wanted the Zorbas’ haunted Victorian with its secret passages, hidden treasures, and myriad spooks (and the witch!) for myself. More than Castle’s other films, 13 Ghosts is geared toward a young audience. The movie is largely told from the perspective of the little boy. Even adult problems like being in debt are filtered through his understanding, as when Buck laments, “Why do they always take our furniture?” Unlike the adults, Buck isn’t afraid of the ghosts; he befriends them. The haunting is tinged with his sense of wonder. That’s what’s great about this movie and Castle’s films generally. They served as gateway drugs to young horror aficionados, teaching people to love creepy things at a young age and to see horror as something wonderful.

Satanic elements figured in many horror movies and books during the 1970s. The Omen (1976) was one of the greatest examples from that decade of the devil.  Jerry Goldsmith’s driving vocal soundtrack signals impending doom. The film’s grim visuals are equally memorable. Though gory on-screen deaths draw a lot of attention, IMO, the creepiest sequence is the visit to the abandoned cemetery of Cerveteri where Robert and Keith are beset by hell hounds.

The devil is present in the form of Damien, but evil also appears as the nanny Mrs. Baylock, the ubiquitous Rottweilers, and the invisible hand that smites anyone who threatens Damien’s rise to power. A disturbing sense of inevitability permeates the film; that helplessness engenders horror as the balance in the battle between good and evil increasingly tips toward the latter.

I considered highlighting The Thing (IMO, one of the best horror stories and John Carpenter’s masterpiece) for the 1980s, but chose instead to focus on the low-budget The Fog (1980). The story is straightforward and simply, but effectively, told. With one memorable exception, the vengeful ghosts remain largely unseen, manifesting only as silhouettes with flaming eyes against a bank of weird fluorescent fog.

On my latest viewing, I was struck by how large a role storytelling plays. Mr. Machen (“guest star” John Houseman) opens the film by telling the ghost story of the Elizabeth Dane. In a later sequence, Fr. Malone reads from his ancestor’s diary about the plot to murder Blake and his comrades while Nick tells Betty about a derelict vessel his father discovered. At the climax, DJ Stevie Wayne narrates the path of the killer fog through the town. The scenes themselves show people merely sitting and talking, but the characters’ dialogue evokes more vivid images in the audience’s minds. During my last viewing, I had no trouble following the film even though I had my back to the screen while washing dishes. I was able to imagine the stories the characters were telling. When handled well, story-telling effectively transcends the limitations of the screen or the budget, and The Fog does so masterfully.

The 1990s offered several mature horror movies geared toward adult audiences. The hardships and eroticism of Mary Reilly and the existential angst of Interview with the Vampire didn’t cry out to a teen audience like the supernatural slashers that dominated the 1980s.

Ordinarily, I’d chafe at the idea that a 20-year-old movie could be deemed a “classic,” but I applauded when TCM recently started airing The Others (2001). One of its greatest strengths is the delineation of the characters. Nicole Kidman delivers a powerhouse performance as mother Grace, an unlikable yet vulnerable protagonist. Young Alakina Mann also excels as strong-willed, occasionally bratty Anne.

The Others is also a masterpiece of storytelling. The world-building detailing the family’s predicament unfolds organically within the first few minutes. The twist ending manages to feel surprising, yet also obvious and natural. It’s especially adept at foreshadowing, from the expression on Grace’s face the first time she picks up a shotgun to her chastising her sulking children to “stop breathing”

Oculus (2014) utilizes ambiguity brilliantly. The movie alternates between past and present and between the dueling perspectives of siblings trying to reconcile with a childhood trauma. Nearly all the action takes place in the family’s house, creating a sense of claustrophobia. Karen Gillan gives an impassioned performance as the determined, slightly deranged adult Kaylie. Brenton Thwaites as Tim, a newly-released mental patient, unexpectedly serves as the voice of reason, challenging Kaylie’s version of events.

One of the most frightening concepts I can imagine is seeing something that isn’t real or that no one else can see. The film’s power derives from placing its unreliable narrators in a situation where the supernatural elements cause disorientation, if they exist at all. What is real and what is illusion? How much is false memory and how much is history? Did their mother suffer a mental breakdown because of their abusive father, or did a vampiric mirror steal their parents’ sanity? Either interpretation makes a horrific story, but the uncertainty around them increases the tension.

What will the next hundred years of horror movies be like? I look forward to seeing as many as I can. Happy viewing!