Hundreds of pairs of feet pounding on Millennium Bridge, the sound of it ricocheting off the River Liffey, was like being inside an enormous beating heart—the chaos and fury mirrored in my own chest. That we all blindly followed a massive puppet toward Wolftone Square to meet up with two other parades led by two different giant puppets didn’t seem strange at all. Neither did the wind rising eerily off the Liffey, nor the howls of Macnas’ street performers cavorting amongst us in the dark. The Summoning had begun.

That was the scene in Dublin, Ireland in 2014, just a few days before Halloween, the first I’d ever spent outside the U.S. The Macnas parade—that year called The Summoning—typically marks the end of the annual Bram Stoker Festival in Dublin. And while my husband and I weren’t in town for the festival (mores the pity), it ended up being my favorite Halloween week ever. Maybe it’s that Samhain, the pagan festival that lived in the liminal time between seasons and which eventually gave way to Halloween. Jack-o-lanterns, dressing in costumes, and trick or treating are all said to have originated in Ireland with the Celts. Is the veil between the living and dead thinner here? Who can tell? But the atmosphere during the Macnas parade certainly made it seem so. After all, it takes a special something to make following along with a parade actually fun. It doesn’t hurt that the spooky band that played in the Square at the apex of the parade routes, interspersed by screeching, cavorting Macnas characters made for an otherworldly night, as though we’d been transported to some evil sprite-filled field, about to be sacrificed for the harvest. 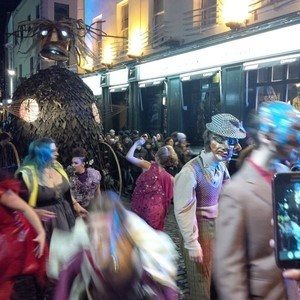 The Summoning parade, winding its way to the Millennium Bridge, 2014, Dublin, Ireland.

But our Dublin trip was not the only time we’ve had the opportunity to experience Halloween outside of the U.S. More recently—2018—we were in Edinburgh, Scotland. While Dublin has always seemed a relatively upbeat city to me, Edinburgh really embraces its darkness. The creepy tangle of tunnels and vaults beneath its Old Town streets, the notoriously haunted Greyfriars Kirkyard—and the Samhuinn Fire Festival, held atop Calton Hill on Halloween night.

The festival sounds harmless enough if you’re an American who perhaps doesn’t know much about Samhuinn lore (again, the Celts, but we’re typically not steeped in the history of it in the States), and that’s how I found myself shivering on top of Calton Hill in the blue-purple dark. The cold Autumn winds snaking under my heavy sweater were only part of it. Incessant drumming gave the night almost a desperate, urgent grit, and no wonder—all over the hill groups of performers played out a drama, winter versus summer, dark versus light. Dancing with wild abandon, frantic drumming, fire-filled acrobatics and battles, marking the transition from Winter to Summer, and there, all of it overseen by the Cailleach, a Celtic representation of the Goddess, or Divine Hag.

More than once I wondered if the writhing bodies in a pit of dancers held an ancient fairy or two. Anything was possible. It was hard to know where to look, where to stand, or even how to process the festivities—because as much as we were spectators, we were part of the ritual. 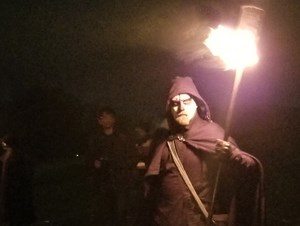 In both Dublin and Edinburgh, I felt very much part of an old and mystical tradition (despite Macnas and the Beltane Fire Society being contemporary organizations)—it’s just a different vibe than Halloween at home in the States. Perhaps it’s because Halloween as we know it here is only a few hundred years old, whereas the Celt origins date back thousands of years. Ireland and Scotland have simply had more practice! But there’s also the fact that Halloween developed far differently in the States, with Halloween traditions likely interpreted through

Puritan colonists who sought to supplant Indigenous spirituality and religious practices relating to death. It changes the flavor of the experience. It makes a bigger difference than I might have imagined.

Of course, this is not to say that I’m slagging American Halloween. Over the years the holiday has meant different things to me—elaborate costume plans for Henri David’s Halloween Ball in Philly, half price candy on the day after Halloween, that year my husband I spent hunting for ghosts overnight at Old Fort Mifflin. And, of course, childhood celebrations involving my mom’s handsewn costumes . . . and apparently trick or treating with my grandmother and little brother, who was dressed as either a weird tribute to John Wayne Gacey or the prescient precursor to Michael Myers from Halloween (the film wasn’t released until the year after this photo was taken). Scary? Yes (although not intentionally so). Mystical? Not so much.

However and wherever you celebrate your Halloween—likely socially distanced this year—I wish you scares and mysticism. And, of course, full size candy bars. We all deserve a treat after the year we’ve all had! 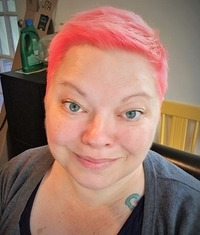 Nicole M. Wolverton is a Philadelphia-based writer currently pursuing a masters of liberal arts at University of Pennsylvania. Her short fiction has been published in Aji magazine, Jersey Devil Press, and elsewhere—most recently in the Coffin Blossoms anthology (Jolly Horror Press), to be released in October 2020. She is also the author of The Trajectory of Dreams (Bitingduck Press). You can find her at nicolewolverton.com, @nicolewolverton, or an airplane.