Dracula. Frankenstein. The Mummy. The Wolfman. Posters covered his walls, as did cotton cobwebs, rubber tarantulas, and bats strung with elastic. Dribbles of wax added authenticity to the gold-painted candelabra on shelves covered with Tales from the Crypt and Vault of Horror comics and antique Aurora monster models. Layered across this display fit for a wax museum was the season’s own finishing touch, stark claw-like shadows of brittle, bare branches cast through his window by the flickering streetlamp outside.

As he stood gazing down at Marlborough Street, Jeff wished he were twelve again—old enough to go even a block ahead of Dad while still young enough to get pounds of free candy. Since he was seventeen, though, he was supposed to be too old for that. Might look too threatening to the generally older, wealthy residents of Back Bay Boston should he, a six foot tall walking corpse, lean into a well-lit foyer and growl, “Trick or treat!”

He turned from the darkening street back to his bed, where white facial stage makeup, a sponge, black eyeliner pencil, white formal gloves, a circular, golden amulet on a red ribbon, and the heavy, long, black cape were strewn. Smiling over the goods, he felt totally prepared. Jeff already wore his uncle’s tuxedo, and his hair was slicked back. After joining the living (his parents) for dinner, he would don the rest of the costume, inspect himself in his bathroom mirror, pretend he couldn’t see a reflection in it, and fully become the only Dracula these trick-or-treaters would care to remember. Practicing his best Lugosi, he said, “There are far worse things awaiting man than cavities.” Then Jeff flashed a wicked smile complements of the porcelain fitted fangs he had worn off and on all afternoon.

He heard his Mom call down from the kitchen and he returned to reality. Scaring crowds of costumed kids was not going to be the exciting work it was on TV and in smaller towns. These days, especially in a city like Boston, trick-or-treating was dwindling due to publicized stories of poisoned candy, and most of the neighborhood was reluctant to open their doors at night. So, this year, Jeff’s parents were hosting a party and asking parents to bring their children.

There was a tap on his door, followed by the wild creaking of the hinges. A couple of tightened screws had achieved the effect. His Mom entered. “Honey, we’ve got to eat now so I can clear the table in time. And I don’t want you to rush or you’ll get tomato sauce on your costume.”

Jeff came out of the bathroom, yanking his fangs out. “None of these kids are going to appreciate it anyway. The effect will wear thin when they laugh at my accent.”  He sat on the edge of his bed and sighed.

After a moment, his Mom sat down next to him and put her hand on his shoulder. “I know you’re not looking forward to this, Jeff. You probably wish you were a little younger tonight.”

He rolled his eyes. “We all grow up, whatever.”

“But I’ll tell you something, pal, this was always one of my favorite holidays, and it still is. I’m forty-four. Incidentally, the Morrises’s daughter Melanie is around your age. They’re bringing her. You can have some wine, if you like, on this grand occasion.”

They stood and she patted her son on the back. In the doorway, he said in character, “I never drink…wine.”

They finished eating just as twilight descended. Jeff flew upstairs and donned the Dracula wear. The plates went into the dishwasher as soon as the doorbell rang. At the bottom of the stairs, he caught his Mom’s gaze and saw her wink. From behind a newspaper his Dad grunted, “Go suck their blood, son.” Jeff floated across the foyer, wrapped his cape about him, and opened the door.

“Trick or treat!” Before him stood a four-and-a-half foot tall cat-woman carrying a writhing mouse-boy on her back. Their eager smiles soon faded to looks of concern.  The Mouse’s head whipped back in search of parents back on the sidewalk, but the King of the Vampires held the Cat’s eyes in his piercing gaze.

Then he opened his cape, changing from mysterious to elegant. “I am Dracula. I bid you welcome.” The girl’s smile returned even if the younger boy remained unsure. As Jeff opened the door wider Susan and little Mike Morris entered, followed by Mr. and Mrs. Morris. They were both shy, and they smiled at Jeff as they walked back into the living room. As they left the foyer, he noticed Mr. Morris was wearing gorilla feet instead of shoes. This made Jeff grunt in approval; the grunt became a sinister chuckle, and soon Dracula was testing the echo of the empty foyer with a resounding, evil laugh.

Then a creak from the open door made him turn toward it, arms still outstretched, head still high, mouth still wide open. It was not the usual pose for attracting women.  Slouching somewhat in the doorway was Melanie Morris. At least that was who it must be, thought Jeff, as he composed himself—but still remaining in character—he wasn’t sure how to act around girls he didn’t know. Her wide brown eyes focused on him in an expression of amazement mixed with what must be the Morris Adult Shyness; her head was tilted down a touch so that those eyes looked out from under a prettily concerned forehead. She gave a sudden, brief smile and walked briskly past him into the living room. As he watched her go, he almost shut the door in Mr. Finch’s face, who was just arriving with his wife and their twin boys.

For the next half-hour, the crowd down the short hall in the living room grew. So did the noise, between uninhibited adults, like the boisterous Mr. Finch who got onion dip in his wife’s hair and proceeded to lick it off, and their children who were high on sugar and numbered around fourteen. Jeff wafted in and out of the room, trying to look darkly dignified.

On one of his return trips he noticed that Melanie had situated herself by the clean but currently dormant fireplace. On either side of her the festivities raged, but she sat in a pocket of calm. Back out in the darkened foyer, he realized that she was in the one spot where she could see the front door. When he suddenly looked down the hall toward her, her pretty eyes immediately darted away to the right. Although they were at opposite ends of the house, they could see each other as if through binoculars.

By the time the last guests wandered in, Jeff stopped returning to the living room.  He rested out on the staircase near the door in anticipation of the madness that awaited him in the form of the kids. All the gaiety seemed about to overflow into his refuge. Sure enough, a shadow slowly began to take over the light pooled on the floor by the hall. But instead of his Mom or, God forbid, a couple of bored, costumed children, it was Melanie who quietly stepped into his shadows. At first, she did not see him, and she moved over to the front window, hands clasped behind her, and knelt by the unlit jack-o’-lantern. Jeff had forgotten all about it; apparently his Mom had asked Melanie to light its candle. The flickering light from the lit match and the candle gave him not only an ethereal image of her face but a feeling that slowly made him stand. Then he forgot why he stood and just watched her.

Then he spoke softly. “Melanie.”

Instead of jumping up in surprise, she merely replied, “Count Dracula, is that you?” Then there was a long, exciting silence.

He descended from the stairs. “Actually, my name is Jeff. Somehow, we’ve never met.”

“I know.” When the light from the hall suddenly revealed him in front of her, Melanie gasped and said, “I really like your costume.” Then she moved out of the shadows.

He saw her try to hide her smile as soon as the light showed it. They now stood two feet apart. Jeff was terrified even though he knew he must look scary to her. He wanted to slip back into character and was just about speak Transylvanian when rapid footsteps approached from behind him.

By the sound of it, all fourteen of them were scurrying toward them. Just as they were about to reach the foyer, the Great Vampire turned on them with a vicious snarl, his vast cape of darkness spread wide. High-pitched screams erupted, as the hallway became a chaotic mass of miniature monsters, princesses, and various creatures delighting in the scare. Then one small voice spoke up: “Where’s Melanie?”

Jeff moved to the side and quickly glanced about the foyer and the dimly lit staircase, but she vanished. Then there came a low creaking sound as the front door slowly swung on its unoiled hinges. There was nobody there. No body, but there sat the jack-o’-lantern flickering away in all its spookiness. They silently gathered around it. In an intentionally trembling voice, Jeff said, “Melanie?”

“Boo!” An explosion of screams perhaps even more impressive than those Jeff had elicited came from the rear of the group. Melanie stood in the middle of the foyer laughing proudly at her scheme. She gave Jeff a wink, and he was now in love.

He decided, too, that he wouldn’t mind showing these kids a frightfully good time if she were there. So, he led them all up the pitch-black staircase, using the jack-o’-lantern as a light. Jeff prepared them for his Monster Palace by giving an ominous warning not to touch the models or cobwebs, it being in their own best interest as mortals. Then he showed them inside. They gasped and shuddered as he gave each ghastly prop the show-and-tell treatment. Particularly effective were the glow-in-the-dark, life-size skull and Ben, his gerbil who, he told them, was a rat who came over on the ship from the Old Country. Finally, he prepared them for Borris Karloff in Frankenstein. By the time he was done setting the mood, even the older kids were ready for a black and white movie. He set the jack-o’-lantern on the shelf above the TV and started the creature feature.

The second feature was a full-color homage to the monster films to which his palace was dedicated, Fred Dekker’s The Monster Squad. Ten minutes into it, the kids were so hooked on monsters that he felt he could leave them entranced for a while. He put Jamie Barton in charge, told his Mom to look in on them, and went outside into the damp, breezy night with Melanie.

As he stepped onto the sidewalk with this girl, he had met only hours before, he felt impossibly comfortable. Halloween was a night when the impossible, the strange, and the supernatural, aspects of humanity the civilized human ignores the rest of the year, were remembered and celebrated in all their mystery. They walked more than a block in silence. Now they reached the vacant corner of Marlborough and Exiter, and a cold gust swirled dead leaves around them.

Melanie spoke first. “You were fun with those kids. You really have a way with them.”

She though for a few seconds. “Then you wouldn’t be out here with me.” They kept walking in the crosswind.

They stopped and more leaves blew past. Jeff looked at the full moon and said into the night, “You don’t need a costume, because you have beautiful brown eyes.”

It was a surprisingly easy thing to say.

She is an Active Member of the Horror Writers Association and the International Thriller Writers who lives in New York. Visit her website: https://www.crimsonscreams.com. Follow Amy on Twitter: https://twitter.com/amy_grech. 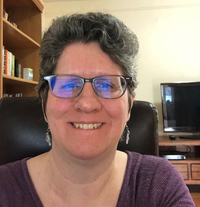