When my father passed away in 2015, I received an unexpected and lovely inheritance: thousands of color slides, many of which featured me as a baby, a toddler, and a child. One of the reasons this was remarkable was because I really thought there weren’t many photos around of me as a kid. My mom only had a handful, and for some reason – even though I remained close to my dad after my parents split up – I hadn’t realized he had so many photos.

I bought a little device that would allow me to digitize the slides and I got to work. I soon had many holiday photos of me at various ages: there I was in my frilly Easter dress, in front of a Christmas tree, donning a goofy birthday hat…

But no Halloween photos.

This was frustrating for a number of reasons, mainly because as a child I had some insane Halloween costumes. Knowing what I ended up specializing in as an adult, it should surprise absolutely no one that Halloween was big in our house. I grew up during what I’ve come to think of as The Golden Age of Trick or Treat. The decade was the ‘60s, and Halloween still belonged to kids (before John Carpenter’s Halloween turned it really scary and the haunted attractions industry lured adults back to the Dark Side). On October 31st, suburban streets all over America were crammed full of costumed juvenile revelers. The kids were rarely accompanied by adults back then (the adults were back home handing out the candy), so it was a night of secret adventures and thrilling empowerment. 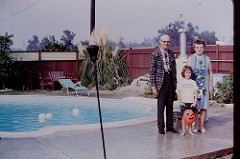 From an early age, I eschewed store-bought costumes in favor of making my own. I didn’t want a tacky nylon outfit that read “Vampire” on the front and came with a silly plastic mask; I wanted to be a vampire. My parents were happy to indulge my demands on this one night a year, especially considering that they obviously got such a kick out of helping me create my outfits.

My first full-tilt gonzo costume was probably 1966; I was seven years old, and one of my favorite television shows was a ridiculous comedy called It’s About Time. It’s About Time was a one-season wonder about astronauts (remember when the U.S. was in the Space Race with Russia?) who accidentally get propelled back in time and wind up living with a tribe of cave people. I wanted to be a cavewoman that year, but of course it wasn’t enough for me to just put on something that looked vaguely like an animal hide – I had to be in a real animal hide. Fortunately for my nascent perfectionism, Dad was a hunter and we had deer skins around. Mom and Dad worked together to craft one into a costume for me (I was very small at 6 so it didn’t take much), and I think they even made me little moccasin-style booties. The one place where my costume dreams ran into problems was with a club: I was so little that I couldn’t heft a big chunk of wood, so I had to settle for a lightweight plastic reproduction. With hair ratted and skin smudged, I made quite the tiny troglodyte. One of my few vivid memories of that year is proudly taking part in a school pageant of costumed kids, most of who were garbed in those store-bought outfits. 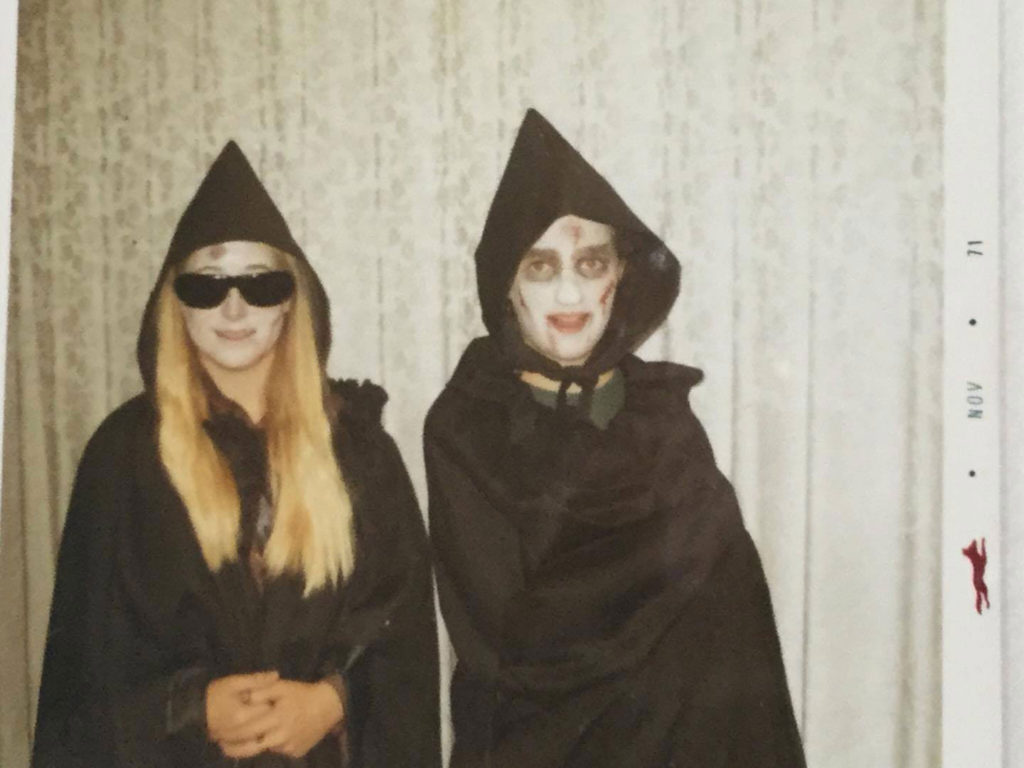 A few years later, I wanted to be a werewolf. I didn’t like the way the werewolf masks in the store looked – they were just rubber with the hair carved, not real – so I decided to make my own. At this point (I think I was about 9), I knew nada about make-up, so I came up with my own way of making my werewolf face: I bought a cheap, plain face mask, a roll of cotton, glue, and spray-on hair color. It took me several days to glue the cotton, which I’d laboriously pulled into long pieces, to the mask, but when I was done it looked amazingly good. I remember getting a lot of compliments on that mask.

My final year of trick or treating was (I think) 1971, when I was 12. My best friend Susan and I loved The Omega Man (if you don’t know this film, it’s a rather silly adaptation of Richard Matheson’s classic I Am Legend, but at 12 it was frigging awesome), so we wanted to trick or treat that year as the hooded vampire/zombie creatures from that film. After seeing an ad in the pages of Famous Monsters of Filmland, I acquired a copy of a simple make-up guide by the legendary Dick Smith, I had used the guide to assemble a little make-up kit, and I used my (non-existent) skills to make us both up, while Susan’s mother (a seamstress) made us hooded black cloaks. Although I was pleased with the results, I remember being frustrated over not being able to get the contact lenses that the movie’s monsters wore. 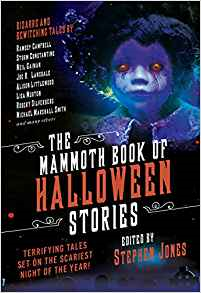 How all of this relates back to my dad’s slides is: I’m still working my way through all of those slides, hoping to find that gold Halloween nugget. The closest I’ve come thus far is one of me standing with my paternal grandparents in our Southern California backyard clutching a plastic jack-o’-lantern treat collector. A few years ago, Susan surprised me with a decent snap of the two of us in our Omega Man get-ups, so I’ve at least got that. But, as some of you can probably guess, when you’re a Halloween expert people expect you to have a personal treasure trove of photos of yourself as the youthful Halloween enthusiast.

The hunt for photos goes on.

TODAY’S GIVEAWAY:  Lisa Morton is giving away a print copy of The Samhanach and Other Halloween Treats.

BIO:  Lisa Morton is a screenwriter, author of non-fiction books, and award-winning prose writer whose work was described by the American Library Association’s Readers’ Advisory Guide to Horror as “consistently dark, unsettling, and frightening”.  She is the author of four novels and more than 130 short stories, a six-time winner of the Bram Stoker Award®, and a world-class Halloween expert. She co-edited (with Ellen Datlow) the anthology Haunted Nights; other recent releases include the short story “The Ultimate Halloween Party App” in the anthology The Mammoth Book of Halloween Stories (edited by Stephen Jones), and the collection The Samhanach and Other Halloween Treats. Forthcoming in 2019 are an anthology of classic ghost tales, co-edited with Leslie Klinger, and more short fiction in anthologies like Odd Partners, edited by Anne Perry. Lisa lives in Los Angeles.