Halloween Haunts: A Scream on Burke’s Circle by Marlena Frank

It’s difficult to convey just how much I love Halloween. We spend hours each September (cause decorations always go up early around here) putting up our wall clings, making sure the front door is suitably creepy, and getting the lighting on our fireplace mantel just right. For us, it’s an aesthetic more than just a holiday. But unlike most horror fans, I was terrified of horror movies as a kid. Most of the time I just tried to avoid them because I got too anxious. It took a long time for me to be desensitized to the gore I saw on the screen, and even today, I have a tough time watching more extreme horror films. But Halloween was different. On Halloween you knew that everybody was doing it for fun. It was exhilarating walking around on a cold autumn night, dressed up as one of your favorite characters, and even getting rewarded with candy.

As a kid, I never trick-or-treated near my home. Our subdivision had mostly dark houses on Halloween night. Instead we drove down to a small community known as Burke’s Circle. This was a Halloween wonderland for us. Each house was like its own mini haunted house, only less claustrophobic. You had your scarecrows in rocking chairs that turned out to be real people. There were garages made up with black sheets to force you to walk through a maze to get to the candy, with thrills along the way. But one house in particular still stands out to me.

It was a tall, white house on a hill. Even though the lights around the front door were bright and cheerful, the rest of the house was pitch dark. That was how you knew there was trouble. All night I had heard screams coming from this area, and I suspected this house had something to do with it. It just looked too normal compared to the others. Then as we were halfway up the driveway, a scream pierced the air, lights flashed from a bedroom on the second floor, and a body flew out the window. A noose had been tied around its neck, and its thin, white night gown, illuminated with strobe lights, wafted in the breeze. I screamed along with all the kids around me. It was glorious. 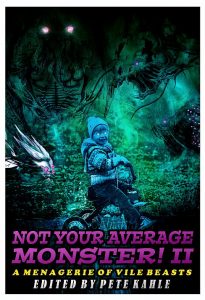 That was absolutely the highlight of my trick-or-treating days as a kid. I always imagined doing something similar in my own neighborhood when I grew up, but events like trunk-or-treat and fall festivals conveniently scheduled on Halloween nights have ruined any plans I once had. My neighborhood, along with most others, are now dark on Halloween. It’s one of the downfalls of loving Halloween down in the South. I doubt I could do a mock suicide and not somehow get visited by the police.

Maybe that’s why I write horror stories instead.

TODAY’S GIVEAWAY: Marlena Frank is giving away a physical copy of Not Your Average Monster Volume 2, which includes her creature horror story, “Tiny Necks”. Comment below or email membership@horror.org with the subject title HH Contest Entry for a chance to win.

Marlena Frank is a writer of both fantasy and horror. Her work is in a smattering of anthologies and tends to lean toward weird horror, creature horror, and YA fantasy. She typically thinks up strange tales while sipping sweet tea at her Georgia home, listening to podcasts on her hour-long commute, or while reading a good book with her three cats. You can follow her at: http://lenafrank.wordpress.com

4 comments on “Halloween Haunts: A Scream on Burke’s Circle by Marlena Frank”