Scary Out There: A Blog on Horror in Young Adult Fiction – a chat with Barry Lyga

Welcome back to the Horror Writers Association’s new blog on scary fiction for teens. We kick things off with Barry Lyga, a finalist for this year’s Bram Stoker Award for Young Adult Fiction. In his own words: Barry Lyga “writes lots of stuff, some of which makes people question their safety around him. But really, he’s just a nice, normal guy. Really. Honest. (Could you hold this hammer for a sec? Thanks.)” 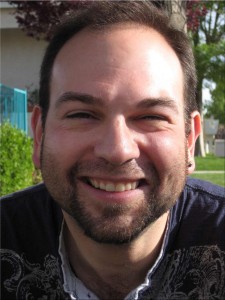 Barry Lyga: OK, this will sound weird, but—

Barry Lyga: Fair enough. Right now I’m sort of terrified of stairs. I know, I know. But about six months ago, I fell down a flight of stairs and broke my foot in four places. It’s still not entirely healed, and every time I look at a staircase, I get this sick feeling in the pit of my stomach. I imagine that’ll go away, though.

Barry Lyga: Well, my more typical fears are the kinds of fears most of us have: Will I succeed at something I’m trying to accomplish, or will I be a big ol’ failure and laughingstock?

Barry Lyga: No, it’s a fear of the unknown, really, that gets me. You can plan and plot and scheme all you want, but at the end of the day, there’s always going to be an unknown X factor that sneaks up on you and sends you off in a direction you could never anticipate.

Jonathan Maberry: How is that different as an adult from what scared you as a teen?

Barry Lyga: When I was a kid, I was too focused and too self-absorbed to be scared of much. Well, except for girls.

Jonathan Maberry: I seem to remember the same dread. 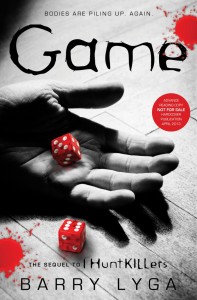 Barry Lyga: Man, when I was 16, nothing was more terrifying to me than a 16-year-old girl.

Jonathan Maberry: Some critics have voiced concerns about writing scary stories for teens. Where do you land on that?

Barry Lyga: I read a lot of Stephen King as a kid, as well as stuff like Alan Moore’s Swamp Thing comics. As best I can tell, I still managed to grow up to be a productive member of society.

Jonathan Maberry: So, this isn’t something new? Something we’ve started inflicting on the current crop of teens?

Barry Lyga: There have always been horror stories for teens, and even younger — think about most fairy tales. Those things are terrifying! And besides, a kid’s imagination run amok is more frightening than anything you can write in a book.

Jonathan Maberry: Does that mean the argument has no merit? That horror fiction can’t sink its claws into teens in a harmful way?

Barry Lyga: I never agree with those concerns. To my way of thinking, there’s no such thing as writing “for teens.” Everyone is different. “Teen” is not a single-definition, monolithic group. Some teens can handle the horror, some can’t. I write for the ones who can and assume the others aren’t reading. Why on earth would I change what I write for someone who isn’t reading it in the first place?

Jonathan Maberry: Let’s shift gears for a bit. How do you define ‘horror fiction’?

Barry Lyga: Once upon a time, I would have said that horror had to have an element of the supernatural. But I’ve been rethinking that lately — especially with so many people calling my books “horror” even though they don’t have any sort of magic to them — and I think it’s fair to say that what horror really needs an element of the unknown or unknowable. That same thing I was talking about before. There needs to be a sense of total lack of control. It’s about taking everyday life and then exposing some random element that spins it wildly away from the quotidian. That’s what makes a story horror.

Jonathan Maberry: Okay, so how is horror fiction different for adults and for teens?

Barry Lyga: I think you’re afraid of different things when you’re a kid. Not fitting in. Standing out too much or at the wrong time. You fear what you might become or what you might not become. Adults have a fear FOR their children. Teens have a fear OF their parents. Or of becoming their parents. So, horror fiction for teens has different fears to exploit, but the tools are basically the same — you’re still taking a comfortable, known scenario and turning it on its head. Preferably with something bloody tossed in there for good measure.

Jonathan Maberry: Tell us about the spooky stuff you write for teens. Give us a quick pitch? 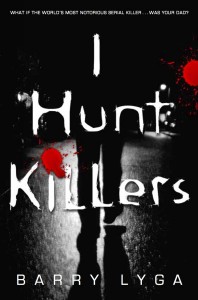 Barry Lyga: What if the world’s worst serial killer was your father? What if he wanted you to grow up to be just like him? What if he trained you since you could walk and hold a knife? What if you’re pretty sure you have no say in the matter? That’s I HUNT KILLERS.

Barry Lyga:  The second book in the I HUNT KILLERS series — GAME — comes out in April.

Jonathan Maberry: Fan recommendation time. If you had to recommend just three YA horror novels –past or present—which books make your must-read list?

Barry Lyga: Probably Libba Bray’s THE DIVINERS, Holly Black’s TITHE, and — it’s not YA, but it’s great — THE STONE CHILD by Dan Poblocki.

Jonathan Maberry: Thanks, Barry. And best of luck at the Stoker Awards in June.