Horror Roundtable 5 – The Editor and The Writer 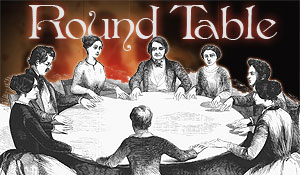 The Editor and The Writer (a view of both sides of the creation coin, as Jason V Brock put it when posing the idea – thanks Jason!).

What’s it like, as a writer, to have your work selected and shaped by an editor? And as an editor, what are the perils and rewards of editing the work of others? Are writers under any obligations to self-edit and get work into a professional shape before they submit anywhere? What about editors who compile versus editors who use a more hands-on approach? What are the lines delineated between writers and editors, and where are they blurred? How can a good editor help a talented writer?

Ellen Datlow has been editing science fiction, fantasy, and horror short fiction for over thirty years. She was fiction editor of OMNI Magazine, Event Horizon, and SCIFICTION and has edited more than fifty anthologies, including the annual The Best Horror of the Year, Darkness: Two Decades of Modern Horror, Naked City: Tales of Urban Fantasy, Blood and Other Cravings, Supernatural Noir, Teeth: Vampire Tales, and After: Dystopian and Post-apocalyptic Tales (the latter two young adult anthologies with Terri Windling). Forthcoming is Hauntings, a reprint anthology  and Queen Victoria’s Book of Spells: An Anthology of Gaslight Fantasy  (with Terri Windling).

She’s has won nine World Fantasy Awards, and has also won multiple Locus Awards, Hugo Awards, Stoker Awards, International Horror Guild Awards, Shirley Jackson Awards, and the 2012 Il Posto Nero Black Spot Award for Excellence as Best Foreign Editor. Datlow was named recipient of the 2007 Karl Edward Wagner Award, given at the British Fantasy Convention for “outstanding contribution to the genre” and was honored with the Life Achievement Award given by the Horror Writers Association, in acknowledgment of superior achievement over an entire career.

She lives in New York and co-hosts the monthly Fantastic Fiction Reading Series at KGB Bar.  More information can be found at www.datlow.com or at her blog: http://ellen-datlow.livejournal.com/. You can also find her on twitter.

John Joseph Adams is the bestselling editor of many anthologies, such asOther Worlds Than These, Armored,Under the Moons of Mars: New Adventures on Barsoom, Brave New Worlds, Wastelands, The Living Dead, Federations, The Improbable Adventures of Sherlock Holmes, andThe Way of the Wizard. He is a four-time finalist for the Hugo Award and a four-time finalist for the World Fantasy Award. He is also the editor and publisher of the magazines Lightspeed and Nightmare, and is the co-host of Wired.com’s The Geek’s Guide to the Galaxy podcast.

Jason V Brock is an award-winning writer, filmmaker, composer, and artist, and has been published in Butcher Knives & Body Counts, The Devil’s Coattails, Calliope, The Bleeding Edge, Black Wings II, and many others. He was Art Director/Managing Editor for Dark Discoveries magazine for more than three years, and has a new magazine out called [NameL3ss].

As a filmmaker, his work includes the documentaries Charles Beaumont: The Short Life of Twilight Zone’s Magic Man; The AckerMonster Chronicles!, and Image, Reflection, Shadow: Artists of the Fantastic. Composer/guitarist for ChiaroscurO. Loves his wife, Sunni, reptiles/amphibians and vegan/vegetarianism.

John Langan‘s next collection of short fiction, THE WIDE, CARNIVOROUS SKY AND OTHER MONSTROUS GEOGRAPHIES, is forthcoming from Hippocampus Press in early 2013.  His previous collection, MR. GAUNT AND OTHER UNEASY ENCOUNTERS (Prime 2008), was a nominee for the Bram Stoker award.  He is also the author of a novel, HOUSE OF WINDOWS (Night Shade 2009).  His stories have appeared in anthologies including A SEASON IN CARCOSA (Miskatonic 2012), BLOOD AND OTHER CRAVINGS (TOR 2011), SUPERNATURAL NOIR (Dark Horse 2011), and GHOSTS BY GASLIGHT (Harper Collins 2011).  His reviews and articles have appeared in the LOS ANGELES REVIEW OF BOOKS, THE NEW YORK REVIEW OF SCIENCE FICTION, EXTRAPOLATION, and SCIENCE FICTION STUDIES.  An adjunct instructor at SUNY New Paltz, he teaches courses in Creative Writing and Gothic Literature.  He lives in the Hudson Valley with his wife and son.

Any spam or comments posted for the sole purpose of self-promotion will be deleted, and will see you banned from further Roundtable involvement.

124 comments on “Horror Roundtable 5 – The Editor and The Writer”